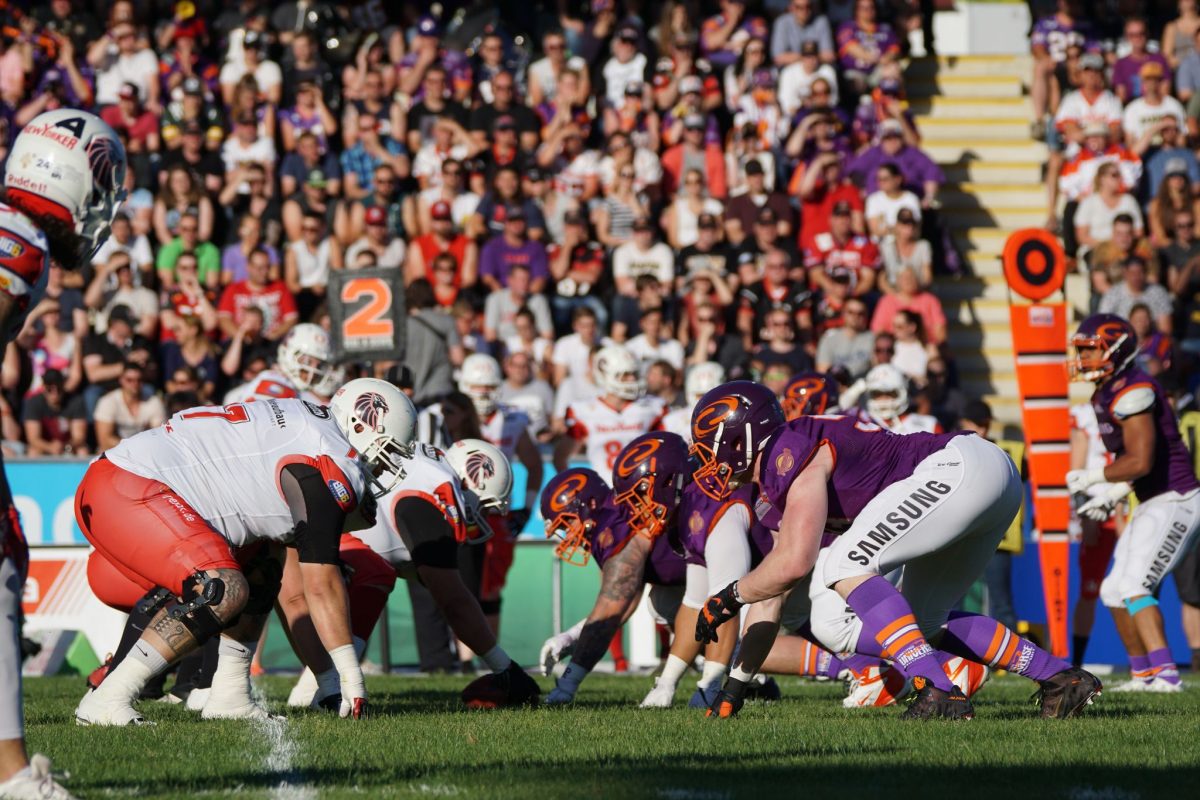 Showdown of Europe’s football throne on prime time on Saturday night: The finale of EUORBOWL XXXII between Samsung Frankfurt Universe and defending champion New Yorker Lions Braunschweig will be broadcast live on SPORT1 on Saturday, 9th of June 9, at 8 p.m. in the Free TV. For the fifth time in the history of the EUROBOWL, a purely German final will be kicked off at the PSD Bank Arena in Frankfurt am Main. Germany’s leading 360 ° sports platform and the German Football League (GFL) are further expanding their cooperation, which began this spring, with this free-TV live broadcast.

Daniel von Busse, COO TV and Member of the Board of SPORT1: „The EUROBOWL is the next highlight in our partnership with the GFL, after we had already agreed to air the German Bowl in October and a weekly GFL magazine beginning in August. With the broadcast of the pure German final in primetime on Saturday night, we substantiate our great commitment to American football and want to inspire more fans for this fascinating sport with this prominent slot. “

„The fact that two of the strongest and most attractive GFL teams can play against each other again this year in the final of the EUROBOWL underlines the top position of our league in Europe,“ said Robert Huber, President of the American Football Association Germany (AFVD). „The partnership with SPORT1 enables us to bring the high sporting quality of German American Football even closer to a larger TV audience before the German Bowl with the EUROBOWL in Frankfurt.“

The German Bowl XL on October 13th will also be shown live and exclusively on SPORT1 – now football fans in Germany can already look forward to three hours of high-class GFL football on Free-TV on the 9th of June: The two teams Frankfurt and Braunschweig had an expected strong start into the season and also lived up to their role as favorites in the preliminary round of the EUROBOWL tournament. In the deciding games Frankfurt (48-6 against Paris) and Braunschweig (60-0 against Amsterdam) had qualified for EUROBOWL XXXII at the end of April with clear home wins.

Both teams are strong this year both in defense and in offense. On the one hand, the outstanding defense achievements of both teams guarantee a thrilling match until the end, while on the other both offer strong US and European players in the offense, who are always good for spectacular touchdowns. After the first five game weeks of the GFL season 2018 offense of the Lions lead on points, while the offense of the Samsung Universe lead after Yards room win in the league. But since both defenses are each one of the top three in in all important categories, only on the lawn of the Frankfurt PSD Bank Arena on Bornheimer Hang it will show what the impressive statistics are actually worth.

As a reward waving the highest trophy of European club football. For the EUROBOWL was first played in 1986, since 1988 there is the annual competition. The New Yorker Lions from Braunschweig are entering the game as defending champions in the Main metropolis, where they won the 2017 final with 55-14. For Braunschweig, this was the fifth EUROBOWL win and the third in a row. With another victory, the Lions would be the sole record holder of the competition in front of the Vienna Vikings, who have also won five times so far. German clubs have so far won a total of eleven EUROBOWLs.

SPORT1 has been broadcasting American football on its platforms for years – such as live on Free TV at the World Games 2017, for example. The pay-TV channel SPORT1 US has been involved in American football since its launch in 2013 – currently, in particular, NCAA College Football. Last year, SPORT1 also presented the live premiere of College Football from the USA on German Free-TV and regularly staged the world’s biggest football talents with a fixed slot on Saturday night. Also on its digital platforms, SPORT1 reports extensively on American football – including in the US sports channel on SPORT1.de or on its social media channels.

The Live-Stream of Eurobowl XXXII at http://www.gfl.info/live-eurobowl2018.html is available worldwide without Geo-Blocking.