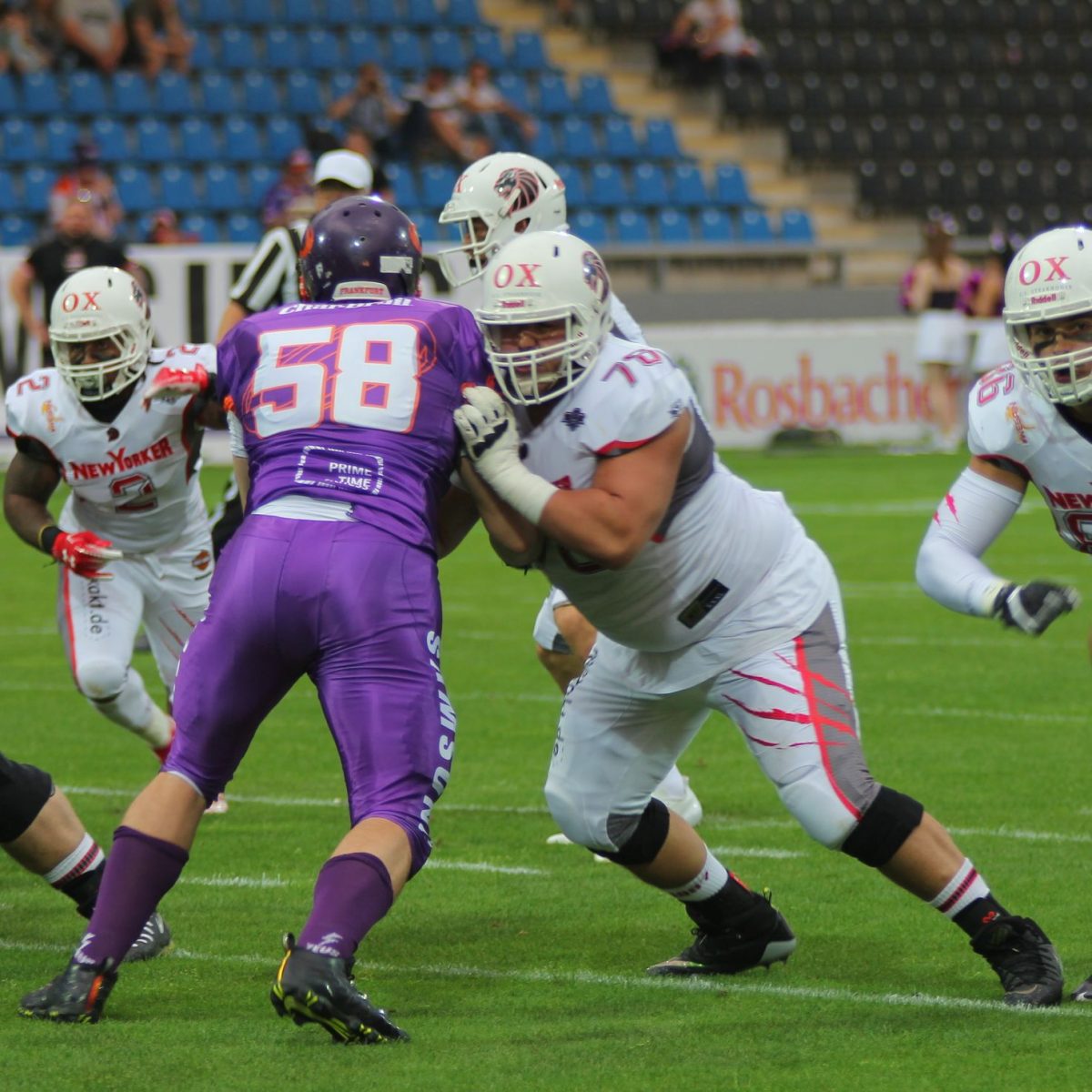 Frankfurt – It was a final, in which nothing was missing. Tactical offense, spectacular defense, numerous penalties, and above all crackling tension to the end. In the EUROBOWL XXXII in the Frankfurt PSD Bank Arena the two opponents Samsung Frankfurt Universe and New Yorker Lions donated but absolutely nothing. And this time not only the fans in the stadium but all football fans all over Germany got their money’s worth through the live broadcast of SPORT1.

And often, when two teams meet at eye level in football, nuances decide – and the special teams. The same applies to the likeliest 20-19 victory of the Lions.

But one after another. The defending champion from Braunschweig got the better start. First, the defense of the guests could stop the first offensive sequence of Frankfurt by a forced fumble. The winning ball then resulted in the first touchdown after a pass from Lions´ quarterback Jadrian Clark to Niklas Römer. Including the extra point the Lower Saxonies led by 7-0.

But then the tension first blew over the sky of Frankfurt. Lightning, thunder and heavy rain caused to a break in the first quarter, the referees sent both teams in the locker rooms. Almost 100 minutes had the 3,122 fans in the stadium hold until the fierce thunderstorm passed and the finale was continued.

The flash seemed to have hit the home side’s locker, as electrified the players of the Samsung Frankfurt Universe came back to the field. In the second turn, Clark was tackled so hard that he lost the egg and the Universe came into possession. In the offense of the Frankfurter Andrew Elffers now moved the strings as quarterback instead of Sonny Weishaupt. And the newcomer from overseas showed what to expect from him. Own runs and targeted passes. And if the opposing defense has to adjust, rooms remain for the others. And so running back Justin Rodney made with a spectacular run over 55 yards for the first touchdown of the Hessians. But the extra point attempt failed and so it was only 6-7 from the point of view of the hosts. A mistake that should take revenge until the end.

But first things went well for Universe. After a pass from Lions´ quarterback Clark into the arms of Frankfurt’s Kweishi Brown, the defensive back sprinted over 60 yards to the next touchdown of the Universe. To compensate for the erroneous extra point attempt, they now went to the two-point conversion. But this was not crowned with success, which left it at Frankfurt 12-7.

In the third quarter, it was again the strong defense of Frankfurt that took the ball by another fumble after a hard tackle on the Lions´ 15 yard line. Shortly thereafter, Elffers found his wide receiver David Geron in the end zone – Universe led by 19-7.

But then the defending champion showed its comeback qualities. David McCants with a 4-yard run and Clark with a 1-yard run turned the game with their touchdowns, the Lions suddenly led 20-10. The hosts had already stopped the lions, but committed at the field goal attempt, however, a personal foul, which led to the automatic new first down of Braunschweig and the subsequent run in the end zone. To extend the lead to three points, the guests tried after the second touchdown a two-point conversion, but failed. And so Frankfurt still had the great opportunity to win the EUROBOWL for the first time.

Yard after yard, it headed to the endzone of the Lions. But the defense of Braunschweig stopped the hosts ultimately on the 25-yard line, so that the coaches decided to shoot a field goal. However, Max Siemssen’s attempt of 43 yards missed the goal lines 53 seconds before the finals ended, destroying the hopes of the hosts  of beating the New Yorker Lions for the first time.

Braunschweig, which also placed the MVP with quarterback Jadrion Clark, won the EUROBOWL for the fourth time in a row, for the sixth time overall – record!

A memorable final that started on Saturday and ended on Sunday. The fans will not soon forget the visit to the stadium or the live broadcast on SPORT1.